The chart above is born out of the feedback that an earlier chart received on-line. I had made a Functional Chart of the EU, in which I tried to “bring home” the political setup of the European Union, by showing where each institution gets its mandate from, and what each institution would be called if instead of being a supra-national entity it was a nation-state. To this end I emphasized that, for example, the Council of the EU (i.e. ‘of Ministers’) is actually the “Upper House” of the EU Legislature.

What sometimes happened was that the complexity of the system was highlighted as proof that the EU is “difficult to understand” for the average Joe, contrary to the straightforward way national political systems function. Another angle of criticism was using some features of national systems as a sine qua non of a democratic system. To put it differently, the argument went: “My nation does X, and is democratic. If the EU does not have X, it is therefore undemocratic”, where X is a feature that is not actually present in all European democracies.

These two lines of criticism seemed to suggest that people don’t always realize how complex national political systems are and how diverse European nations are when it comes how they have evolved as political systems. I myself have learned that Romania’s way of confirming a government by a vote of both houses of Parliament in joint session is not, in fact, that common in our Union.

But there are wonderful details that I found throughout the Single Market states:

So while the EU does have its quirks, there is plenty of diversity on the national levels as well.

On a side note, as I made the Functional Chart of the EU, I quickly became fixated with a particular type of chart one often sees on Wikipedia articles, mapping the way the electorate and the 3 powers of the state – executive, legislative and judicial – interact with each other.

And I also welcome any feedback in case of any mistake I might have slipped in.

The EU is often accused of being too complicated and difficult to understand by the European every-man.

One aspect of this critique is that every institution is headed by a President, and wouldn’t it be great if things were more like in a normal country, where the Parliament is headed by a Speaker, the government by a Prime-Minister, and the state – if it’s a republic – by a President?

Not all European countries have this neat linguistic differentiation of roles. Italy is just presidenti all around, and Croatia next door are just one predsjednik after another. Even in countries that do make distinctions, things can be complicated. The Third and Fourth French republics had a President of the Council (sounds familiar?) instead of a Prime-Minister, and the PM of Greece (Πρωθυπουργός) is also called the President (Πρόεδρος) of the Government, using the same word as the Head of State or the Speaker. 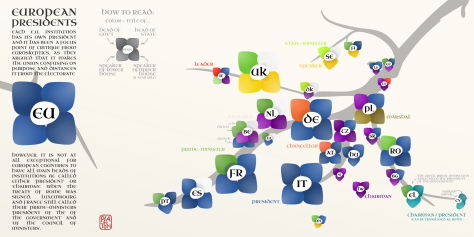 But I must concede that a re-branding of the main institutions could go a long way to making the European Union more intuitive to the average Joe, and thus less stressful. So here are some suggestions:

All in all, I think the linguistic imperative should be to separate the titles, more than make them identical in all the Union’s languages. Having the EuroParl President be called “Speaker” in English and “Marszałek” in Polish might not be problematic, and it might give the listener a sense of familiarity.

Note: The aesthetics of the visualization were inspired by my recent trip to the British Museum. I have wanted for some time to make a more artsy viz. Feedback always appreciated.

This is my personal tribute to “Face of a Nation“, Güney Soykan’s wonderful art/dataviz project. The nation I added to his series is the European Union, seen through the faces of its Commission Presidents. 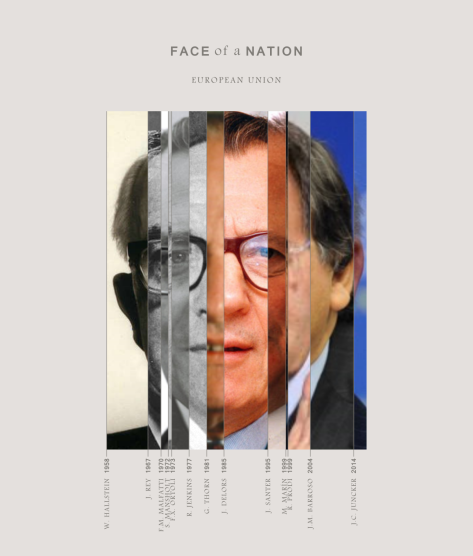 I took the liberty of going back a few more years, and I changed the square layout to a slight rectangle.

Some etymology maps with the names of the main EU institutions. Obviously the “European” part of the name is left out.

The most heterogeneous of the 3, there are three main etymologies spread across the continent: the Latin “Concilium”, the Germanic “Rad” and the Slavic “Savet” (which is indeed related to ‘Soviet’) with a few other interesting words dotting the map.

Although in most languages the European Council and the Council of the European Union are called the same thing, there are a handful of languages where the name of the two institutions differ, namely Estonian, Bosnian and Azerbaijani.

Much less diverse than the Council, we find, as often is the case in these maps, that Icelandic, Hungarian, Armenian, Basque and Greek do not fall in line with the majority. Interestingly enough, the Breton word for the Commission is related etymologically with the Welsh word for the European Council.

An even more conformist situation than above, here even Hungarian and Basque use the dominant word of “Parliament”. It’s worth pointing out that often the national legislatures have a much higher diversity of names.

Made in Inkscape. Base map from Wikimedia Commons. Data mostly from Wiktionary and Wikipedia.